Engelbert Humperdinck To Perform In Pampanga 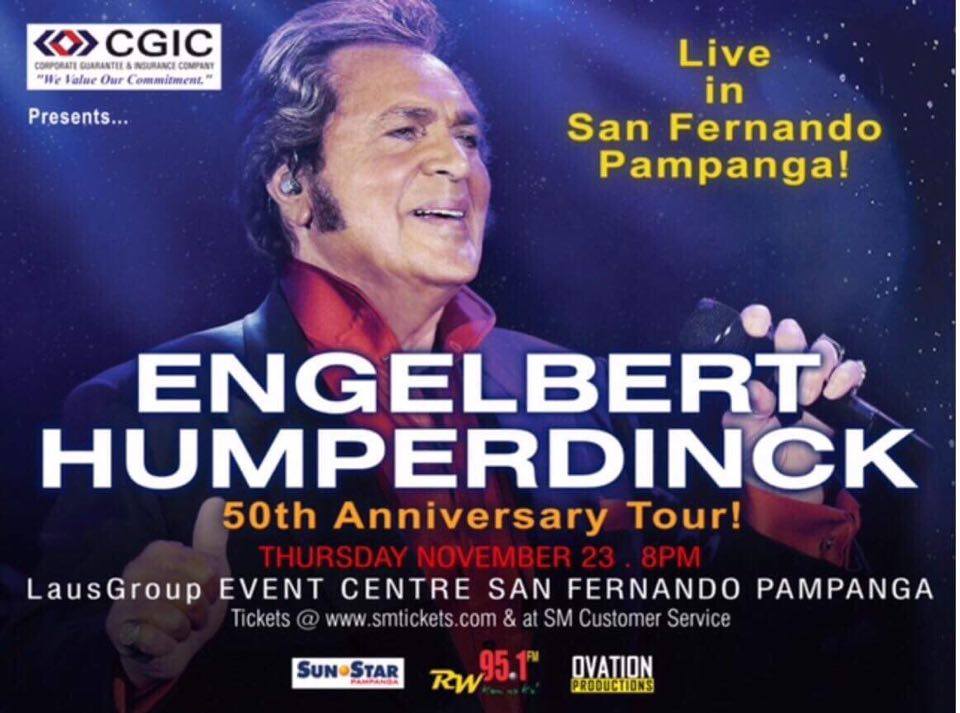 Engelbert Humperdinck To Perform In Pampanga

Engelbert Humperdinck to perform in Pampanga Sunday, November 05, 2017 CITY OF SAN FERNANDO — Remember “Release Me,” “Quando, Quando, Quando,” “The Way It Used To Be,” and “After The Loving”? Now, you can hear them live and go back through time as international music legend Engelbert Humperdinck performs live at the LausGroup Event Centre at Laus Group Complex, Jose Abad Santos Avenue on November 23, courtesy of Corporate Guarantee and Insurance Company (CGIC) in partnership with Ovation Productions.

Part of the Engelbert Humperdinck 50th Anniversary Tour, the LausGroup Event Centre leg will treat Kapampangans and music lovers as well as fans from all over Central and North Luzon to a celebration of love and romance with a dazzling array of classic love songs and romantic ballads.

According to Laus Group of Companies Chairman and Chief Executive Officer Levy Laus, the Engelbert Humperdinck concert is part of introducing more ventures and exciting events that will bring prestige to the name of Pampanga and lifestyle of Kapampangans.

“We are always looking for more ways to give our kabalens the best that life has to offer.

In fact, we will be hosting yet another must-see event this coming November 23, as we welcome world-renowned balladeer Engelbert Humperdinck at the LausGroup Event Centre,” he shared.

“We are very thrilled that for the first time, we will be having international artists, ahead of Metro Manila.

This is a privilege not only for the LausGroup, but of the province of Pampanga as well,” Laus said. The LausGroup Event Centre has been home to big concerts and performers like the Philippine Philharmonic Orchestra, Martin Nievera, Gary Valenciano and Vina Morales among others.

It was also the venue of choice for the Pampanga immersion of Miss Earth International 2017 candidates and the pageant’s swimsuit and resort wear competition recently.

The Engelbert Humperdinck pre-Christmas event here will kick off a four-date, four-city concert series that also includes shows on November 28 at the Smart Araneta Coliseum, 30th at the Alonte Sports Arena in Binan City, Laguna and on December 2 at the CPU in Iloilo City, stops of a global touring celebration of a successful half century in the music and entertainment industry of the singer considered as one of the hottest male pop idols of the ‘60s.

It brings back to the concert scene for his fifth appearance in the past 12 years the crooner dubbed as “King of Romance” and who has charmed millions worldwide with his rich repertoire that encompasses a broad range of genres.

The concert will take the audience to a memorable time of love and romance as it showcases the musical brilliance of Humperdinck, an ultra-smooth balladeer whose beautiful interpretation of lyrics and excellent vocal technique have earned him an enduring place in pop music.

Among the hit songs that he will perform in his sweet, powerful voice are “Release Me,” “Quando, Quando, Quando,” “The Way It Used To Be,” “The Last Waltz,” “After The Loving,” “Man Without Love,” “Spanish Eyes,” “Love Me With All Your Heart,” “Am I That Easy To Forget,” and many more.

Engelbert Humperdinck’s passion for music was inspired by a life lived with a love for music that started at an early age when, as Arnold George Dorsey in Leicester, England, he began studying music and playing the saxophone at the age of 11 and discovered his vocal talent for impersonation at 17.

With the outrageously memorable name of Engelbert Humperdinck (after the Austrian composer of the 19th century opera, “Hansel and Gretel”), and with his deep voice and thick sideburns, he burst into the music scene in the ‘60s along with The Beatles, The Rolling Stones and Tom Jones, and was catapulted almost instantly to the status of world icon. His debut single “Release Me,” became an instant hit when it went into the Guinness Book of Records for staying 56 weeks in the charts and became No. 1 in 11 countries.

Humperdinck was subsequently hailed by The London Times as “the premier voice of the 20th century” for his inimitable three-and-a-half octave range and ultra-smooth onstage charisma that captivated fans of every generation in many parts of the world. In the last four decades, he has generated record sales in excess of 150 million records, including 64 gold albums and 24 platinum albums, and won four Grammy Awards, a Golden Globe award and a star on the Hollywood Walk of Fame.

Aside from touring the world before sold-out crowds in Great Britain, United States, Australia, Germany, Belgium, Canada and Southeast Asia, Humperdinck has performed for Queen Elizabeth II, several US presidents and many other heads of states.

In 2007, he marked four decades in the music industry with his critically-acclaimed 40th Anniversary Tour, a 100-city worldwide celebration that coincided with the release of “The Winding Road,” his album which featured “contemporary British classics” by such great musicians as John Lennon, Paul McCartney, Elton John, Sting, Eric Clapton, Christine McVie and James Blunt.

Five years later, in 2012, he represented the United Kingdom in the final of the Eurovision Song Contest in Baku, Azerbaijan, where he set a record by being the oldest singer to participate in the competition at the age of 76.

His double-CD of duets, “Engelbert Calling,” was released in the United Kingdom by Conehead Records last March 17 and charted in the UK Top 40.

For the past few months, Humperdinck has brought his 50th anniversary tour across the globe, making stops in major cities in the United States, United Kingdom, other parts of Europe, and Asia, including the Philippines.

Now on his sixth decade in music and show business, Humperdinck remains a formidable figure in pop music, a true icon of entertainment who radiates excellence in his honeyed, mellow voice and inspires people of the present age who exalt him as an extraordinary performer and a quintessential romantic balladeer. CGIC Poised To Move Up To New ISO Level 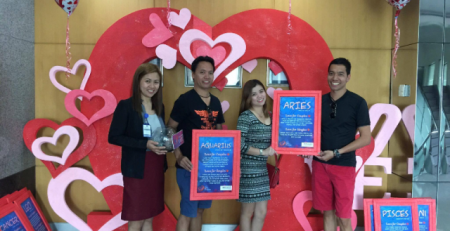 Feel The Love From CGIC