In the case of Corporate Guarantee and Insurance Company, more famously CGIC, prescience appears to be just as critical. And in an imperfect world and in a highly competitive arena as insurance, it could spell the difference between a short-life and a long, expanding future.

The existential distance between a business idea and prescience is anniversary, growth and evolution.

To begin with, CGIC has just marked its 18th year in the business.

But look at the context and the horizon.

The latest industry reports are rosy and the prospects seem rosier. In terms of premiums and profit, growth was, for the first half of 2015 (which looks like a magical year for business), robust and record-breaking. That is for both the life and non-life sector.

Where does that place CGIC, a non-life insurance firm whose distinct pride is having its head office right where its origin is: the countryside?

On top, that’s where CGIC remains as one of the top performers in a field of 67 non-life insurance outfits in the Philippines, down from 100. Last year, CGIC ranked 21st in premiums earned.

Last March 28, CGIC passed anew the ISO surveillance audit conducted by SGS Philippines. The audit, simply put, confirmed that the company has conformed with the requirements of the audit standard and provided sufficient structure to support implementation and maintenance of the quality management system.

In other words, CGIC has kept a hard nose focus on excellence and integrity in its operations, particularly in giving its customers the best there is, even from a global-class standpoint.

CGIC is one of only six (6) non-life insurance firms in the country that is ISO-certified, a highly valued, highly-desired stature in modern-day business, especially in as tightly regulated and highly competitive industry as insurance.

Gilbert M. Fernandez, who has been at the helm of CGIC as president and COO, waxes both pride and confidence in what their ISO has meant to them and for their customers.

“Our quality management system is consistent with our vision and our plans that CGIC will continue to grow and make profits, increase our customers base and geographic reach,“ he says.

Today, CGIC is serving its current customers and inviting prospects through its several branches in Metro Manila, Central and Northern Luzon, the same geographic territory that has been strategically mapped out for expansion by the Laus Group of Companies, by far the largest automotive dealership network in the Philippines.

In August last year, CGIC inked a memorandum of agreement with Maxicare, one of the country’s leading health maintenance organization â€“ a tie-up that will further bolster both image, prestige and service for CGIC customers.

It’s not only products and services that matter to CGIC. People do, too.

Last June, CGIC took another step forward toward excellence by working on and getting an accreditation from the Investors in People (IiP), an international assessment body based in the U.K. represented by IiP Philippines to further push people management excellence. Proudly, CGIC is the first and only non-life insurance company nationwide to be accredited by IiP.

CSR-wise, CGIC also claimed an honorific citation from the Philippine Insurers and Reinsurers Association as an outstanding non-life insurance company with a definite commitment to social responsibility through free safety driving seminar for its customers and general public.

At the end of it is the sacred idea that life is precious and public safety is both a civic and corporate responsibility.

Even in times of calamities, CGIC has done its corporate part to be as helpful to its clients as possible. In the recent past, such as when destructive typhoons like Ondoy, Habagat and Odette, CGIC came to the aid of hundreds of affected clients in Central Luzon and Metro Manila.

“It isn’t just about our business commitment but corporate responsibility to respond to our customers and communities in times of distress and calamity, “ Fernandez notes with conviction.

It’s also, he points out, wholly consistent with the company’s slogan: We Value Our Commitment.

And so it goes. And so CGIC continues to rise, almost as Chairman and CEO Levy P. Laus, the genius behind CGIC — and the Laus Group and their continuing evolution as he had seen it on his crystal ball nearly two decades ago.

That’s two years off, to be exact, but something to look forward to for a great milestone. Another Safety Driving Seminar was successfully conducted by Corporate Guarantee and Insurance Company last June 6, 2015 at the... read more 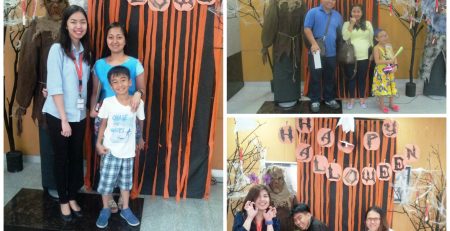 “Traditions are important in our company and we always find Halloween as one of the best holiday occasions to... read more As part of its Corporate Social Responsibility, CGIC organized and successfully carried out a Gift-giving and Feeding Program for... read more